HEART OF THE STORM WILL BE RELEASED ON SEPTEMBER 25TH 2021.

ABOUT HEART OF THE STORM:

Change is coming to the far-future Tuscan wasteland, and it will leave no one untouched.

Things are finally stable in the small community of rebels who have reclaimed the ruins of Siena. And more people are leaving the safety of Florence to cross the barren landscape and try their luck in the new settlement.

When a new Covey of wanderers arrive, Teo offers them respite and starts to dream of new horizons. Renn finds himself eager to rejoin the wanderer life and is faced with a difficult decision. In his own home, Luca begins to tire of his comfortable, post-apocalyptic routine of technological tinkering.

Meanwhile in Florence, the political climate is shifting, leaving a family of four in the outer city slums, and the powerful Mayor’s own son questioning their safety.

Heart of the Storm is the final installment of Marie Howalt’s Moonless trilogy. Picking up the threads from the previous two books, it weaves the personal tales of the post-apocalypse into a thrilling conclusion as Renn, Luca, Teo and the other Sienans tackle their biggest challenges yet.

PRAISE FOR THE MOONLESS SERIES

“An absolute page-turner… Howalt expertly balances brisk pacing, a vivid dystopian world, and a humane and subversive cast of characters while simultaneously exploring the complex themes of democracy, governance, and religion, the foundation for the rebuilding of a new society. Readers will be swept away by this fantastic dystopian tale.”
— The Prairies Book Review

“…Howalt has this amazing ability to write personal topics and feel as if they had devastating world shattering consequences… Like all second books in a trilogy, Seeking Shelter is a rebel with a cause, fighting to grow out of its original’s shadow, doing so wonderfully. It is an epic of a minute scale, which can cure the lethargic heart of society with empathy and grace.”
— Aden Ng, author of The Chronicles of Tearha series, and editor at Ombak Magazine

“Howalt’s brand of sci-fi is my favorite kind—the kind where the characters’ depths and growth are equally as important as the sci-fi elements. The world, its history, and its characters are vivid and an absolute joy to read. I’m always happy to escape from our current reality in the pages of anything written by Howalt, and this book is no exception.”
— Laura Morrison, author of Come Back to the Swamp, the Chronicles of Fritillary series, and the Space Mantis podcast

“I have to admit that once I started the book, I became a bit obsessed. I latched on to these characters immediately and didn’t want to let go.”
— Steeven R. Orr, author and host of the Just Another Fanboy podcast

“Howalt has created a perfect sequel which builds on everything that made the first book so special and expands on it in organic and meaningful ways. Meeting the previous cast again felt like reuniting with old, dear friends. The themes take on a new life, focusing on things like what makes a society, superstition, and cultural differences. Esmia is a delightful and expertly crafted addition to the cast. Howalt has crafted a beautiful world, and characters you cannot help but love, even when they aren’t being their best selves. Seeking Shelter is a testament to Howalt’s supreme skill in world and character building and is a must-read for anyone who loves dystopian fiction, great characters, and a world you cannot help but sink into.”
— Kathy Joy, author of Last One to the Bridge 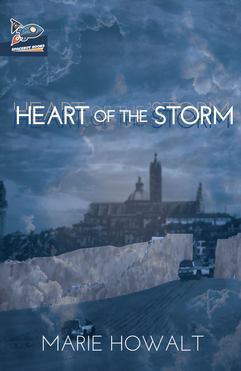